Minecraft is one of the most popular independent games around. It has been available publicly since 2009, although the official release of the full version was on November 18, 2011, almost exactly one year ago.

The game is defined on its own wiki as a "sandbox construction game ... [that] involves players creating and destroying various types of blocks in a three-dimensional environment". This vague description doesn't really explain the greatness of the game. It even makes the game seem more like a toy box than a typical video game with clear goals. 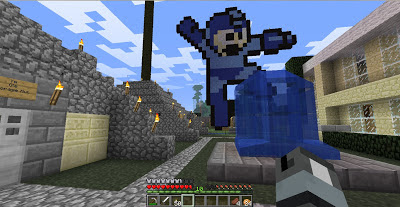 Minecraft is unbelievably successful, having sold 8,102,029 copies at the time of writing. It enjoys a strong community on the PC, its primary platform. It has even surprised many by dethroning Call of Duty as the most played game on the Xbox 360 during the week of October 15th, 2012 (http://bit.ly/10f4mn8).

This week, while playing Minecraft, I found myself slaying Enderman to work towards the main goal of the game (gaining access to The End and slaying the Ender Dragon); meticulously building a house with its very own waterfalls and floating forest; exploring the land to find an abandoned mineshaft, NPC villages, and impressive natural surface ravines and surreal landscapes; and implementing a teleportation machine system to sort of justify using the teleport commands as well a means to share discovered locations. The friends with whom I was playing built a Megaman sprite, a far more elaborate house than mine, and a sky railway to facilitate transportation to far-off lands. Only a fraction of our actions were towards accomplishing the main goal of the game. 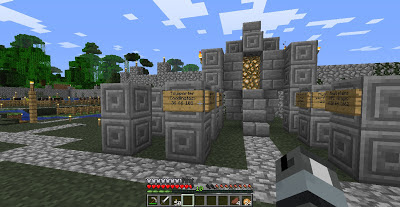 Who would have guessed that all these actions would have been possible in a "sandbox construction game ... [that] involves players creating and destroying various types of blocks in a three-dimensional environment"? Even though most of those goals weren't explicitly presented by the game, I was nonetheless drawn to complete them.

I found out later last week that these new goals and actions are called resultant actions. In The Art of Game Design by Jesse Schell, two types of actions are examined. The first, operative actions, are defined as "the base actions players can take". For example, Minecraft's base actions include movement, block creation and destruction, crafting, and combat.

However, from these few actions spring many other actions, such as the majority of the ones I wrote about having done last week in Minecraft. In other words, lots of new actions and goals were born from the few actions available to the player. Jesse Schell states that these are resultant actions, and that they "have to do with how the player is using the operative actions to achieve a goal".

Schell explains that a large amount of these resultant actions makes for emergent gameplay. In a way, the player can find, or even conceive, extra things to do that stem from the game's basic actions. The game sort of takes on a life of its own, evolving into something more than what first meets the eye. This is a quality often lacking from more linear games, such as Metroid or Uncharted. These types of games, while none the less great in their own respect, don't have nearly as many resultant actions than more open-ended games like Minecraft, Grand Theft Auto or Fable, which allow the imagination of the player to manifest itself in the game world. (Click for good example of emergent gameplay in Fable.) 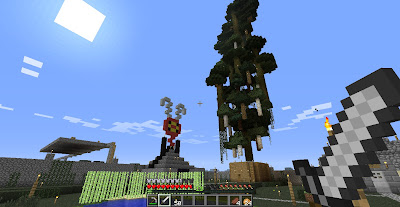 Hacking and exploiting game flaws can also creates emergent gameplay, in both multiplayer as well as single-player games. While some emergent gameplay is definitely intended by the game designer, hacking creates unintentional resultant actions, which I find is an interesting thing to consider.

It was nice to finally find out exactly why I like games like Minecraft so much. Emergent gameplay is a quality that I think most gamers can feel when playing a game with lots of it. I felt it while recently playing Minecraft, but I wouldn't have been able to properly explain it without help from Jesse Schell's super interesting manual on game design. I'll surely be watching for emergent gameplay and seeing how my imagination can become part of the games I play.
Posted by Chad at 19:28