When the behavior of the computer is coherent and the results of participation are clear and well motivated, the interactor experiences the pleasure of agency, of making something happen in a dynamically responsive world. - Janet Murray (http://inventingthemedium.com/glossary)

Playing Façade has made me think about the current state of player agency in videogames. Façade is a "one-act interactive drama" released in 2005 (get it for free here). In the game, you play as a friend invited to a couple's apartment. During your visit, the couple argues and depending on your actions, they can make amends, break up (for multiple reasons), kick you out, or find no progress. Those are the outcomes I got so far.

The AI characters dynamically respond to your actions, your choices, and the speech you type in. Even though the graphics are basic and the game is short, the programming is extremely impressive. The game explores human interactions and relationships, a theme not often seen in videogames. Even if the theme is different than other games, it's definitely the player agency and the dynamic story that makes it a unique gameplay experience.

And as impressive as it is, Façade is only scratching the surface: the potential for dynamic stories in videogames is massive.

In most games where you play as a humanoid character, the list of things you can do as a player are usually physical, like driving cars, climbing buildings, cutting or shooting enemies apart, swimming, and so on. Videogames are built around gameplay devices such as these.

If gameplay is the foundation of the videogame, don't these physical mechanics limit videogame narratives? Shouldn't game designers wanting to deliver great stories rather focus on more interpersonal mechanics, such as those in Façade?

The Promise of Dynamic Storytelling

In comparing Façade and traditional, more linear games like Assassin's Creed, it's interesting to consider how they tell their stories. AC has many talented writers who deliver great fantasy stories blended with historical facts. This is one of the reasons I continue to follow the series. While the games have good storylines, they aren't dynamic. Even though the games are interactive by definition, it's only the game world that is interactive, not the story: as mentioned earlier, most game mechanics involve physical interaction with the game world.

I knew interactive stories existed before, but Façade really showed me their potential in videogames. Videogames are the only medium that permits and invites non-linearity. Each player has his own subjective experience of the game, no matter how limited the game is. Even in linear games like Super Mario Bros., each player's thought process is different, which reflects in the way the player plays the game and how he experiences it.

Now that Façade has showed me the promise of truly interactive stories, I can't help but feel as if the vast majority of modern videogame stories aren't harnessing the power of the medium. Imagine a blockbuster movie conveying its story through text. "Use moving pictures to tell the story, for crying out loud!" someone might say. It's what defines film, after all. For the same reason, story-heavy videogames should try to convey their narrative via game elements instead of cinematics. It's as if videogame stories are ignoring what makes them unique instead of embracing it.

The String of Pearls

Most progressive videogames (games that offer a linear experience which the player "beats" by reaching the end) can be represented by a simple diagram. This is called the string of pearls representation: 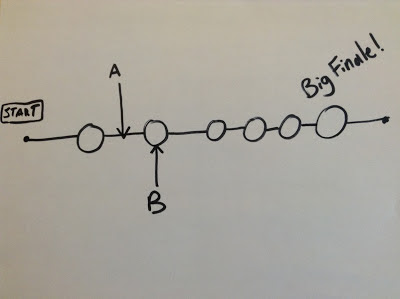 The lines (A) are non-interactive (or highly restricted) segments that progress the game. They can be cutscenes, like in Assassin's Creed, Grand Theft Auto and countless other mainstream big-budget game. They can also be restricted in-game segments the player must get through in order to continue, such as the barriers or doors that must be opened by non-playable characters in Half-Life 2.

The beads (B) represent areas where the player has some sort of freedom. In most FPS games, you can manoeuvre your character through levels with a certain level of freedom. In some parts of Assassin's Creed, you can choose how to approach and kill your targets. But you have to finish these levels, and you have to assassinate each target in order to move the game story forward, usually with a cutscene.

Curious as to its inner workings, I downloaded Façade's guide document, Behind the Façade. It took a 15-thousand-word document to illustrate how the game works. The narrative structure is very complex and definitely doesn't fit into the string of beads representation. Here's an excerpt from the beginning of the document that sums up the designers' goal, a goal that deserves to be followed:

Videogames excel at giving players high-agency experiences — that is, providing ample opportunities for the player to take action and receive immediate feedback. With Façade we wanted to create an interactive drama that provides the level of immediate, moment-by-moment agency found in games, but unlike games, also provides longer-term player influence over the plot itself.

You can do anything! Really!

GTAIV is one of those games that people say you can do almost anything in. If you examine the game, however, Niko's story unfolds in mostly linear fashion. Yes, you can choose who to text, which side missions to do and in what order to complete some missions, but the story is pre-scripted and the player can't dynamically change it.

Thus, GTAIV could still be represented by a string of pearls diagram, albeit with a few interchangeable and/or optional beads. I think it's a great game and is one of the few big-budget games that does allow a certain flexibility in its story (Bethesda games would have a LOT of optional/interchangeable beads!), but I know that there's more potential for videogame stories. I don't think string-of-pearls games need to die, nor do I want them to, but the burning promise of potential makes me wish more game designers would share Façade's goal.

One mustn't confuse the player freedom and avatar (the controllable character) freedom. In Façade, if I want to say something to Trip or Grace, I say it, whereas Niko does all the talking in GTAIV, not the player. In games like Façade, the player really plays the role of the avatar. On the other hand, players only watch while Niko takes over during the cutscenes. So no, you can't do anything in GTAIV. You do whatever Niko wants to during crucial story segments. While you can do all sorts of fun zany antics during the gameplay "beads", virtually nothing you do can changes the lines connecting the beads. Façade made me feel like I was in control more so than GTAIV, perhaps even more so than any other game.

Game developers have come so far when it comes to interacting with game worlds. GTAIV and Assassin's Creed offer highly realistic simulations of physical interactions like driving and climbing. With so many developments in this respect, there have been very little progress in the dynamic story department.

There are a few popular games that have stories that arise from game mechanics. The Walking Dead does a great job of making small choices and actions feel meaningful and affect how characters react. Braid is the example by excellence of a game where meaning comes from game mechanics. BioShock's story relies on videogames as a medium to deliver its story's punch. Even though Grand Theft Auto IV's main plot is structured as a glorified string of pearls, unique stories often emerge by interacting with the game world. Minecraft's emergent gameplay makes so that each player has a hand in crafting his game experience.
Any game with emergent gameplay that creates stories is a step in this direction.

Videogames are a young medium. I really believe its future innovations lie in dynamic stories and game worlds where player agency is favored above bleeding-edge graphics and cutscenes. Imagine a sequel to Skyrim where you can have dynamic conversations with villagers instead of selecting from a short list of responses, where these villagers remember past interactions. Imagine a Grand Theft Auto game where you can get into a dynamic argument after walking into a fellow pedestrian, who would then react to your reaction instead of spitting out one of several pre-baked responses.

In the future of videogames, I not only want to have games in which I can climb buildings and games in which dynamic conversations are possible: I want games that can do both!
Posted by Chad at 17:24