A friend asked me if I knew many games that use gameplay mechanics as part of the message. What started out as a quick list is now a full blog post. Here are a few games, in alphabetical order, that I think effectively use game mechanics to deliver some kind of artistic or literary message.

The only criteria for this list is that all these videogames only work as games and wouldn't be able to be converted into other art forms without losing its message. These are narratives that must be videogames to work.

BioShock is considered by some as a turning point for gaming. Its narrative transcends the game and comments on both the medium itself as well as the player. I'll always remember it as a groundbreaking narrative that made me question every game I had played prior. Gameplay, and by extension, videogames themselves, are crucial to BioShock's narrative. Yes, a movie set in the BioShock universe could be great, but the videogame's narrative would lose its significance outside of the medium.

BioShock Infinite's narrative is arguably better and might even be richer and more varied, but I found it lacked the transcendence (and therefor some of the significance) of its older brother. It's still an awesome game and a great example of world creation. It also holds many other virtues, but its narrative just doesn't hinge on the fact that it's a videogame, so I can't really include it in this list. 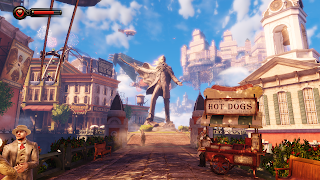 Braid by Jonathan Blow is one of the most successful and well-received indie games and was the first indie game to be incredibly successful. During talks and conferences, he often discusses innovative and non-traditional gameplay theories. Braid's narrative punch is delivered through one of its primary gameplay mechanics, making it impossible to be delivered through any other medium. It also happens to be really fun. (http://braid-game.com/)


Dys4ia is an autobiographical game by Anna Anthropy (http://www.newgrounds.com/portal/view/591565). The game depicts her transgender transformation in a distinctively videogame way. Most scenes are mini games and act as metaphors for her experience with gender therapy.

Anna published a book called Rise of the Videogame Zinester to incite people to design expressive and meaningful videogames that represent minorities. I found it very helpful when planning my own game about Acadian culture.


Façade's experimental story design just can't exist anywhere other than in a videogame. I discuss it in another article: http://www.fringfrangblog.com/2013/03/dynamic-stories.html

Journey's multiplayer function deconstructs modern online play. Instead of blowing each other's heads off, players help each other or even regenerate their scarves when in close proximity. I've never seen such consistently patient and helpful online players in any other game. It's the most personal and, dare I say, real connection I've had with multiplayer videogames, and it's been with completely random players from who knows where. It's not something you can read or watch; you have to experience Journey first-hand. It's game design at its best.

Papo &  Yo is another autobiographical game, this time by Montreal-based Minority Media. It's the last game I beat since the game was recently released on Steam (http://store.steampowered.com/app/227080). It was a PS3-exclusive until earlier this month.

It's an allegorical game about the creative director's abusive father during his childhood. Just like in literature, all gameplay elements are allegorical and effectively convey the tragic narrative through gameplay. I'd be lying if I said the game didn't strike a few deep chords. It's definitely one of the most personal games out there and worth buying to experience and support this type of game creation. I'm not sure if this experience is non-translatable to other mediums, but the fact that it does what many believe videogames can't will get it a spot on this list for now. Passage is one of Jason Rohrer's art games. Rohrer's art games are characterized by their simplicity: the graphics, sound, and gameplay are all very basic. Passage deconstructs traditional horizontal progression games to illustrate the passage of life and how certain choices can limit or benefit you using gameplay mechanics as metaphors. It's one of the most distilled examples of game mechanics creating meaning that I can think of. It's Rohrer's art games as well as a few others (such as Rod Humble's The Marriage) that really illustrated to me the basic idea of mechanics as metaphor. For a simplistic five-minute game, it packs quite the emotional punch. The game is available for free here:  http://hcsoftware.sourceforge.net/passage/.

It was while reading a critical reading of Spec Ops: The Line that I realized how much videogames could pull from literary studies. That's not to say the game is like a book. Although Spec Ops: The Line can be studied from a literary lens, this is always done in relation to it being a videogame. Much like cinema has its own tools to convey meaning, so too does videogames. This is a relatively new way of thinking, and Spec Ops: The Line is definitely a great example of this new wave.

The author of the critique refers to the game as a post-BioShock game. From what I understand, this means that its narrative examines the relation between the game, the player, and the world much like BioShock's did. The critical reading, while quite long, was really interesting and gave me much insight in how videogames can matter in the real world: https://gumroad.com/l/fsdz. There's an interesting 3-part article on Rock Paper Shotgun with the writers of The Line and Far Cry 3 discussing many interesting things: http://www.rockpapershotgun.com/2013/04/09/fire-away-spec-ops-far-cry-3-writers-on-criticizing-fps/ 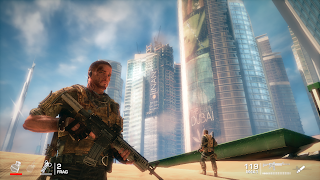 Portal might have been the first time I was genuinely surprised by a videogame story. Without revealing anything, the game flips the player's expectations at certain points. The entire game consists of puzzles, and this cannot be effectively translated to another medium. I haven't thought about its narrative as much as some of the other games on this list, so I'll have to finish my analysis here. It (along with Half-Life 2) deserve more reflection. In the meanwhile, here's an interesting article on Portal's narrative: http://www.playtime-arts.com/portal-and-the-meta-narrative-maker/

More on the subject: http://www.penny-arcade.com/patv/episode/mechanics-as-metaphor-part-1
Posted by Chad at 21:35