Atlantic Canada: The RPG exists, and I couldn't be happier. Click here to download the game! And click here to watch a playthrough with the creator.

The Motorleague, a band based in Moncton, New Brunswick, has just released an RPG game starring the band members on a quest to assemble the Vinyl of Light. Check out the band's latest music video, which doubles as a game trailer:

Made with Atlantic pride

In Atlantic Canada: The RPG, the player’s quest begins in Moncton, New Brunswick, the place that's become my second home. The city streets are populated by characters representing various local musicians. I couldn’t help but smile when recognising an acquaintance or someone I’d seen at shows around town.

Upon entering one of the game's many bars, I discovered that it represented the Paramount, a little venue that shut down a few years ago. "This is the Paramount Lounge," one of the musicians tells me. "It's closed now, but it lives on here." This place was important enough to the designer that he re-created it so that the bar could "live on" in more than just memory.

The game’s enemies, items, locations, and scenarios contain loads of cultural references and jokes. For example, just outside of in-game Moncton, you can visit Magnetic Hill (only after acquiring the touring van from Mount Carleton, of course) and the giant Shediac lobster statue, complete with real-life pictures. Virtual sight-seeing rewards the player with experience points.

It's a strange feeling, exploring a familiar virtual space. This is the first time I've ever experienced a game set in familiar territory. But why did it take until 2014 for this to happen?

Game design as a hobby

Making games as a hobby wasn't very common until recently. That’s one of the reasons why we’re only seeing projects like Don’s and mine now.

Don Levandier, frontman of The Motorleague, created Atlantic Canada: The RPG in his spare time. His passion for gaming pushed him to make a game of his own. The same is true for me: we are both video game hobbyists. Free from financial obligations and design restrictions, we can create whatever kind of game we want. We can make something fun for our friends without worrying that it won’t sell or that the target market is too small.

Video game creation is more accessible than ever. There are lots of free and low-cost game creation programs out there right now to help non-programmers make games. With game design available to more people, a much wider range of games are being created. This diversity means more variety and inclusiveness across games as a medium.

For example, there are now games about dealing with depression, a transgender person’s experience, coping with cancer, childhood abuse, etc. These are but a few examples of the growing number of modern games that deal with themes never before tackled in video games. Games aren’t just about shooting stuff: designers can make a game about anything that’s important to them. 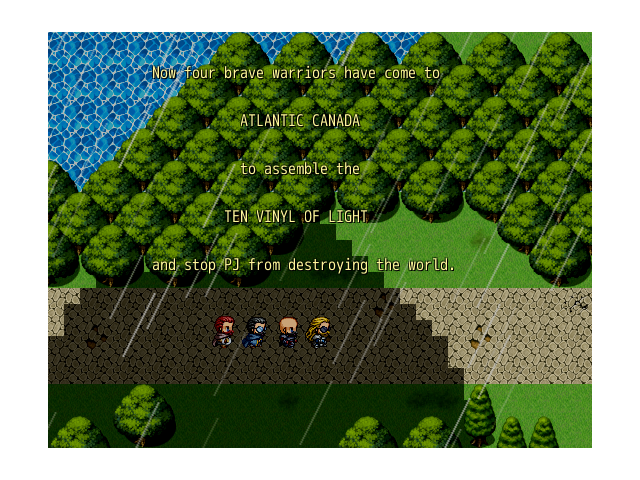 As of this week, gamers now get to experience an East Coast RPG. I really enjoyed embarking on this musical quest in Don's fantasy version of the Maritimes, but for some people, this game may not seem significant. As a hobbyist game, it’s a little rough around edges and looks dated. It’s not a slick, well-polished commercial product made to appeal to the masses. Instead, it’s a comical and strongly personal RPG about the Atlantic Canadian rock/metal music scene. For those who are familiar with the characters and locations, this game is special and personal to a degree that a mass-market game, by its very nature, can never be.

Next month, I will be releasing La vie d’Arcade, my video game about Acadian culture. While I’ve been saying that we're going to see more and more personal hobbyist games, I didn’t really have any evidence from around home to back this up. Then along came Atlantic Canada: The RPG, a fun-filled testament to the rise of hobbyist game designers. In fact, both games are built with the same engine, although they play quite differently.

Just a few years ago, games were much less diverse than they are today, and diversity in video games will only continue to expand as time goes on. I can’t wait to see what kind of games my neighbours will create next!

To conclude this first look at Atlantic Canada: The RPG, here’s a quote from Anna Anthropy's book Rise of the Videogame Zinesters:

The ability to work in any art form with the digital game's unique capabilities for expression shouldn't be restricted to a privileged (and profit-oriented) few. If everyone is given the means to work in an art form, then we'll invariably see a much more diverse, experimental, and ultimately rich body of work... this transformation of games - and the role games will play in the art and culture of the twenty-first century - is not only necessary, but inevitable.